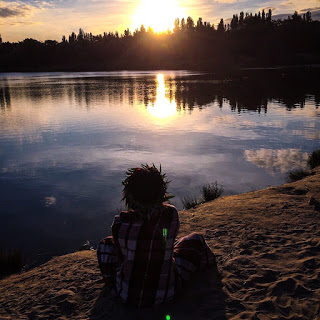 I have always disliked walking alone at night. The bus dropped me at a different junction, leaving me with no other choice than to take this path home. The only times I ever took this path was during the day,even then it still sent chills down my spine with its obscure serenity.

As I walked down the path, wide enough to take about seven people at once. The forest that embodies this path was moderately thick, thick enough for someone to hide without been noticed. I couldn’t help but wonder what dirty deeds goes on in there. Rituals and the likes.

I kept distracting myself with beautiful thoughts but it didn’t help, I was trying so hard to save myself from a panic attack.

There was a full moon, it was beautiful but it didn’t hesitate to remind me of the possibility of werewolves been real. I kept on walking, trying to focus on the sweet scent of the night.

Suddenly ,I heard voices ahead, male voices. My heart sank as goose bumps rose all over my body. I was scared. I couldn’t go back now. Instead, I closed my eyes, said a quick prayer and kept walking.

There were three guys on the right and four on the left, with a lady right in the middle of the road. I avoided any eye contact as I increased my pace. The next thing I knew the lady crossed my path, I tried to deviate to another, she moved and smiled . I didn’t smile back, I just kept trying to pass through.

Swiftly she grabbed me by my wrist and said ‘What a pretty thing, does anyone want to have some fun with this cutie?’ I could almost taste the mixture of vodka and weed in her breathe as I was intoxicated with fear.

I tried to pull my wrist out of her grasp but I wasn’t strong enough, I finally voiced out ‘ Let go of me! ’ instead she laughed and tightened her grasp on my wrist.

Suddenly, I felt someone grab my waist from behind, I tried to twist and turn but that didn’t help. He brought his mouth close to my right ear and whispered ‘cutie, how do you like it?’

This only made me more angry. I tried to release my wrist from the lady but I couldn’t.

‘Let’s see how much fight you’ve got.’ She said as she burst into laughter,let go of my wrist and started to walk away.

I tried to fight him off by kicking and punching. The other guys started coming around and in no time I was in the middle of seven men. I wished upon the stars that my heart would stop at that moment for I wasn’t sure I had the strength to pull through this situation.

The guy behind me finally loosened his tight hold on my waist as he turned me around.

I knew the devil existed but I never imagined looking into his eyes. He was literally like a giant with eyes blazing like they had been raw fetched from the pits of hell.

I stood my ground, I wasn’t going down without a fight.

He smiled and said ‘Let this cutie go, the other guys ahead would like to have her untouched.’

My God is greater. Immediately, the circle broke and I started to run .

I didn’t know how long I ran until my body came to a halt and I remembered the guy did mention something about the guys ahead. I can’t go back, it’s only God that saw me through till here, I believe I will come out of this in one piece but I’m still scared.

I tried to listen hard into the night, but all I could hear was nothing but the wild whispers of the night creatures. I looked into the forest and back at the road. Without over thinking I leaped into the forest, yes I will take my chances for if there are really any more guys ahead, I might be able to get away from them.

Luckily for me, there was a slightly clear path which allowed me to avoid stepping on an broken branches, thereby being undetected. I knew I was left with about 10 minutes walk and I have seen no one. I bet that devil only said that to scare me. I smiled to myself, well I was still right to be scared. I’m never in my life walking this ‘short-cut’ ever again, night or day.

‘Wait , I think I just heard something!’, the voice in my head exclaimed loudly.

I walked a few meters and it became louder.

‘Leave me alone you asshole!’ the girl screamed

Oh no, the devil did not lie. I walked as silent as I could until I got close enough. I peeped in through the space between the leaves, almost immediately the girl continued ‘Please somebody help me’ she screamed as one of the guys just stood above her examining her with his eyes like a meal he was about to devour, while the other struggled to pin her down.

The two guys were tall, well-built and in no doubt strong, for just one didn’t have so much problem pinning her down.

Did I just walk into hell or what?

My first instinct said ‘Run’, I turned my back, one feet in front of the other.

I took about two steps but I couldn’t do it, It could have been me laying there helplessly. I can’t take on this guys by myself. Quickly, I brought out my phone and conveniently there was no service.

I realized I had to think fast as I saw one of the guys punch her straight in the face and the other leaned in to hold her arms- barbaric monsters!

If I could find a big tree branch, I could hit it on one of the guys head and hopefully if I can get one down, maybe I can get both of them.

The little voice said ‘Is that your plan? You just signed your death sentence. It’s not too late, you can run as fast as you can ,get out of here and once you do you can get help.’

The other voice said ‘You know it would be too late by then, If it was you, what would you have wanted a passerby to do?’

Okay okay, I said, ‘I can do this’, ‘I can do this’. I kept repeating this sentence in my head, this might be the last thing I do but I will rather go down fighting than do nothing at all.

I tip-toed quietly behind one of the guys as he was attempting to take off the girl’s trousers, I hit him as hard as I could on his head and he just slumped on the floor .

The second guy let go of the girl’s arms and came straight head on for me as we both fell to the ground, he punched me about twice. Immediately my ears started ringing and my sight was blurry.

I tried to fight him off, struggling to grab the tree branch.

Finally , I grabbed the tree branch. I tried to hit him but instead he grabbed my feet, causing me to loose balance. I hit the floor so hard I could have sworn I heard bones break.

He managed to land a couple more punches to my chest, abdomen and face.

Everything became blurry, I saw unicorns dancing as the stars in the sky faded out to white.

I woke up in a hospital bed as my mother’s scarred, concerned, angry and relieved look welcomed me.

I turned to the other side of the room ,only to see two other ladies in the room and one rushed towards me,hugged me so tightly it hurt and said ‘ Thank you so much for coming to my rescue.’ as she burst into tears.

The second lady saw when the guys were attacking her but she was too scared to come out. She watched as I came out and knocked out one of the guys and battled the other till he knocked me out. She came to our rescue. She, together with the other lady successfully knocked out the other guy and tied them both up.

They were able to call for help, and also get the guys arrested. I hope those monsters never see outside of a jail cell till they die.

We can never allow fear to get the best of us, because the minute we are driven by fear, we are no longer in control and sometimes that rids us of the very foundation of our existence-Humanity.

Strength indeed comes from within.

THANK YOU VERY MUCH FOR READING.

YOUR COMMENTS ARE APPRECIATED.

Previous Article
~~~THE SPY~~~
Next Article
THE COLD TRACKS OF ANIMOSITY!

THE COLD TRACKS OF ANIMOSITY!
Mariam Alayande May 14, 2017