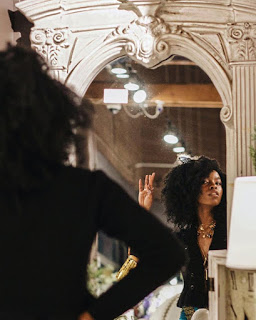 Your best day is someone else’s worst. The stars align for each and every one of us, but have you ever felt like some days aren’t yours?

It was a busy night, the air outside my hostel smelled of suya and smoke. The usual night ritual with ladies and guys talking, laughing with flirting eyes, not to forget the cars with tinted glasses leaving the ongoing actions to your imagination.

I have been chatting with this guy named Funsho on Instagram. He recently moved back to Nigeria from South Africa (I guess xenophobia will do that to you).
He’s been asking for us to meet and I finally agreed to see him tonight but we are not going out. All we are going to do is meet up, talk and hang out around my hostel.

He was punctual, dressed in a suit. You’d think he was going to the altar to exchange vows, classy but I wasn’t expecting that. He smelled like lavender with his brown inquisitive eyes and brown skin. He talked a lot about fashion as we played “WHAT YOU SHOULD HAVE WORN INSTEAD” game with every one who paraded around us.

He seemed cool but his brown eyes told a different story, something was off about him. I wasn’t sure if I wanted to find out the darkness beneath his smiles but his company was amazing. He paid so much attention, it was nice but slightly strange.
We talked a little about politics for he must have realized I had no interest and deviated into history which I was fascinated with. His high intellect was undeniable, bringing out the sapiosexual in me.
The night ended early because my roommates kept texting me to remind me I promised to cook dinner.
We bid each other goodbye and I stood in front of my hostel’s gate till his car disappeared into the night.

Few days later, we decided to go out to have lunch.

The clouds that day was gloomy and you could tell it was going to rain: heavy.

Perhaps, a sign to stay put in your house but the weather is tricky and besides I’m not going to be walking around.

He picked the place but I must say my appetite for sea food was beyond satisfaction with his choice.

When it was time to pay, I insisted we split the bills and Funsho agreed. This is something I do, if I initiated the meeting, I would pay the full bills discreetly because some guys have big issues with splitting the bills or even letting you pay, but to me it is no big deal. Some insist on paying and I take satisfaction in offering. If I don’t have money for what I’m about to eat or do, I would stay at home. Most of my friends disagree with this mentality, but how can we say equality if we are not willing to work for it.

As he drove out of the restaurant he mentioned he had to pass by his place to pick his passport, which was required to register for his national identification number and he intended on registering right after he dropped me. He said it was on the way and would only take about two minutes.

First, my head screamed red alert but he seemed like a gentleman.

We talked about family and siblings as another downpour began, for some reason rain in the afternoon seems to be very inconvenient. We arrived at his compound, I couldn’t bring myself to ask if he owned the mansion, but it was safe to assume. He parked far away from the main entrance.

He asked me to come in with him but I denied and insisted I would wait in the car.

About a minute passed, I opened my purse to bring out my phone as I noticed the smoke oozing out of the car’s bonnet. Instinctively, I jumped out of the car and for the next 30 seconds I paraded in the rain, as I went over to the driver’s side to open up the bonnet. His gatekeeper noticed what was happening and ran towards me. He asked me to go take cover on the front porch but for some reason the house cried ‘devil’s lair’ to me. Few minutes in the rain, I was getting soaked so I headed out for the front porch.

Funsho stepped out almost immediately, I was dripping wet and my t-shirt glued to my body, I was glad I wasn’t wearing a wig but I was quite sure my makeup was dripping off (disadvantage of not wearing water-proof everything).

Funsho handed me wipes, a towel and a shirt but while doing this, he was a little too close for comfort. I tried to take a step back but instead he curled his arm around my waist and stared so hard at me as if his brown eyes were going to hypnotize me.
My heart skipped 10 beats as he whispered ‘you should get out of this clothes, they are pretty, wet.’ He whispered as he ran his finger down my sternocleidomastoid muscle on my neck.

What did I tell you? Something was freaking off, I tried my best not to freak out.

An hour passed, my shirt was dry and I changed. Every time I asked if he was ready he came up with an excuse after the other. Earlier, he decided to take another car so I was sure the car was not the reason for the delay. I always knew my bad sense of direction was going to get me in trouble and today was probably one of those days.

Three hours passed and I was starting to think he was going to use me for money ritual. I tried to come up with defense plans but they all ended with me losing.
‘Don’t be so negative, just freaking calm down!’ My inner voice comforted.

Finally, the hostile moments were over and we got into the car and started driving to the campus.

I suspected he wasn’t going the right way but I wasn’t sure. ‘Are you sure this is the right way?’ I asked as I tried not to look nervous.

‘Of course, this is a different route, definitely nothing to worry about.’ He affirmed as he smiled.

I was quiet as the radio played one music after another, my mind explored the worse case scenarios. I didn’t tell anyone where I was going or who I was going out with, I wasn’t ready to die, I didn’t want to be another body found in pieces in a ditch.

I could hear my mother’s voice screaming ‘You children of nowadays never listen, after the horrors of soka, how dare you entrust your life to a stranger.’ All I could do was pray my worst fears didn’t come to pass.

I texted my roommate ‘I’m scared, I went out again with Funsho, the guy I told you about last week and I’m afraid he’s going the wrong way.’

‘Do you know you are very beautiful.’ Funsho said breaching the silence and immediately I locked my phone.

‘Yes I do, thank you’ I said as I tried my best to form a smile but I didn’t make it halfway.

‘Even without all those layers of make up.” He continued but I didn’t respond.

We had spent almost 45 minutes on the road and I was sure the area we were coming from should have taken us only 25 minutes to get to the campus.

‘So tell me, how do you like it?’ He enquired as he stared at me like he just asked the most reasonable question in the universe.

‘What do you mean?’ I asked as my forehead couldn’t help but twist.

‘Don’t be a bitch, you know what I mean when I ask how do you like it, I bet you are into some freaky shit yeah, you’ll make good tied up and played with.’ He said as he smiled.

I opened my mouth out of shock and I couldn’t apprehend the words my ears just transferred up to me, I shook frantically.

At that moment I noticed a hill, I remembered I always saw that hill whenever I followed my friend to her church or let me say whenever my friend dragged me there. The church was at the other side of town. Now I had a reason to be scared, we definitely aren’t headed to the campus. All I needed to do was get this freak to stop the car but that wouldn’t be easy; probably impossible.

I spent the next minute talking myself into bravery.

‘Could you please stop the car, I need to pee,’ I lied as I tried to play it cool.

‘I asked you a fucking question, answer me!’ He shouted and then smiled

I knew I had to say something, the opposite of whatever I was thinking.

Instinctively, I pick up my phone slowly and tried to text my roommate again to let her know things had escalated to level 10.

‘What are you trying to do?’ Funsho asked as he snatched my phone and threw it out.

He grabbed my neck tight with his right hand while his left hand remained on the steering.

‘No more silly moves.’ He warned as he slammed my head hard into the glove compartment / airbag lid.

I thought I was scared before but now I was SCARED and my head began to ring. I tried my best to look as calm as possible.

I faked a smile at him as I managed to say ‘Oh dear you didn’t have to do that with my phone or my head.’

‘Sweetheart you weren’t going to answer the fucking question, you gave me no choice.’ He said in a calm tone as he smiled.

Meanwhile I was trying to unlock my door manually.

‘You don’t even have to answer me, you and I have all the time in the world, you will like it how I like it.’ he said as he laughed.

I joined in the laughter, the door was unlocked. I checked the wing mirror for cars but there was none, I needed to jump out of the car and I didn’t think twice.

‘Fuck you!’ I screamed as I opened the door as fast as I could and rolled out, my shoulder landing hard on the cold wet tarred road followed by my body.

I managed to get up as quickly as I could, the car stopped while he shut the passenger door. I didn’t wait to see if he reversed, I headed straight for the path around the hill and luckily I made it to the church.

God came to my rescue. The pastor and his wife drove me to the hospital, I dislocated my shoulder and bruised my legs.

I wouldn’t disagree I put myself in harm’s way.

Indeed, not everyone finds friendship or love on social media. For some, their greatest nightmare lurks behind a message.

We all wear masks and it is impossible to know what is beneath until it slips.

Previous Article
~A TIME OF TRANQUILLITY~
Next Article
PAIN FOR SALE- WHO’S BUYING?