BLOOD OF MY BLOOD!!!

BLOOD OF MY BLOOD!!! 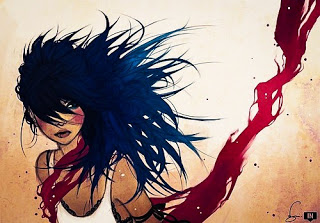 Knees knocking, as I beheld my palms, soaked conspicuously in blood,blood of my blood. I turned the tap furiously with my legs struggling against gravity, my stomach trying to keep all my visceral organs in place. I scrubbed and scrubbed in an effort to erase all evidence or any other questionable element. After which I was finally free… or so I thought.

Dragging my sore cold feet into the elevator after another exhaustingly cold day in pharmacy school. Sincerely, I was starting to think in doses, sleep with medications and talk in prescriptions. Dribbling through my bag for my keys, unlocking my door, finally the warmth of being home.

Left leg in front of the right, as I reached for the lights I felt a slippery surface beneath my feet and in that instant landed flat on my back. In an attempt to feel my way back up, I only fell again. “This isn’t water”, I thought to myself while I managed gather a good grip and hit the lights.

***uncut*** I yelled out loud. “Blood, blood, blood, bl..ood…”, was all I kept muttering in my subconscious state of bewilderedness, my feet trembled and could no longer hold me up. Bam! I was back on the floor.

Imaginations flowing through my head, couldn’t stop thinking whose blood it was? An animal? Hell No! All I wanted was to imagine the best variant of this story but I couldn’t , The trail led to the bathroom.

At this point, I had begun to imagine the worst. Only two people had the keys to my apartment. “Oh Lord, let this be one long nightmare for now would be a great time to wake up”, I prayed as I followed the blood trail into the bathroom, “Oh My God!” “IBIDUN! Ibidun!!” there she laid in the pool of her blood on the cold tiled floor, next to the tub, with a slit wrist.

I couldn’t tell how long but I know I stood still for very long while, I guess I went numb. ‘Shock, consternation, hysteria.” these words do not even begin to define the way I felt.

“You killed her, you killed your stepsister…” a still voice ringing repeatedly in my head. I should have seen this coming.

In a brief moment of sober reflection, I wanted to cry but even tears had deserted me. “E gba mi o” (someone help me), I screamed in an attempt to call for help. I ran out of the house to neighbouring apartments and knocked on doors until someone finally answered.

I called family members next and the rest, well, so so. It doesn’t get any gloomier.

As I watched Ibidun’s body lowered 6ft below, I observed those present, many of whom were never there for her when she was alive, wailing and shedding crocodile tears, flooding their social media accounts and timelines with the proceedings of the burial rights.

Savage! Will people ever learn to respect the dead? I wondered. “But you can’t blame them, it’s more your fault than theirs”, the thin voice whispered. I turned sharply but it was just my aunt lurking behind me but I was pretty sure the voice I heard was that of an adult male.

It was probably just the grief and stress getting to me, however, behind the facade I blame myself for everything, yes, I do.Ashes to ashes, dust to dust. My step sister even so far away, yet so close I could still hear her sweet voice.

“Banke! Banke!!” Ibidun called out as she sighted banke making her way down the stairs, “Yes Yes…” Banke answered sharply “Hold on sis, I really need to talk to you about something” Ibidun explained trying to reach for her sister’s arm.

“Not now, I’ve got issues of my own to deal with at the moment, can we do this later?’ Banke responded and freed herself of her sister’s grip.

“No, it can’t, it can’t. These voices are back in my head, this time they’re louder and they’re saying really mean and scary things.

It’s almost like they are now in control of my thoughts, it’s driving me crazy

“hmmmn… madam goosebumps, we all know you have quite an imagination, I’m pretty sure it’s just the spirits messing with you again, but my dear, I have to go, perhaps when I return we can dwell more on the subject of your visions, ha ha”

“They will kill me!” Ibidun yelled.

‘Come on, stop being so dramatic’, Banke interjected with a smirk and hurried away.

I woke up shivering, this nightmare had lingered on for way too long, only it was as real as hell, for my supposed nightmare had occurred two days before Ibidun took her own life. It was the last time we shared words. I’ve dealt with these abysmal images in my dreams each and every night since she passed away. Perhaps I will not sleep anymore.
“It’s all your fault, after all you killed her”, the voiced echoed again.
SHUT UP!!!!! I yelled rather subconsciously.

I moved out and into a new apartment few weeks after my sister’s unfortunate demise. People probably imagined I was just too depressed with the grief of staying in the same house my sister passed away in. How wrong they were.

The voices never went away. Every day, I had to the deal with voices and images springing up in my head and thoughts.

I could hardly recognize me.

Now dear reader, I might not be able to point out exactly where I am at the moment nor narrate with the right vocabulary all that I have been through, but, *sigh* I’ve got a feeling they are coming for me too and there is nothing anyone can do about that right now. I could have saved her, I should have, but I did not. Don’t dare ask why.

Somehow I overcame the voices and could finally hear myself think – “there was nothing I could have done for her.” I say to myself sometimes and that’s how I get by. I hope she’s at peace now.

Seating at the right side of the dining table with my mum, step-mum, dad and my other two siblings sharing a delicious meal.

Midway, I paused to grab my glass of water, behold just like the biblical stories of the plagued Egyptian River Nile, my water had mysteriously turned blood red and there she was right before me,my sister soaked immensely in blood as it continuously rushed out from her slit wrists.

I literally flipped from my chair, dropping and shattering the glass. I could neither cry nor shout. I’m in this, all by myself, with a bitter, guilty and broken soul. My mind has become a thorn in my own flesh. Whose sins are my paying for though?

Which begs one, “Did I play a part in my sister’s demise”?

THANKS FOR READING.
PLEASE DO NOT FORGET TO LIKE,SHARE AND LEAVE YOUR COMMENTS. 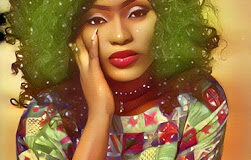